Skip to content
HomeFestivalsTihar, What are the 5 days of Tihar?

The festival is an indication of how the people in Nepal give importance to other living things. The festival also shows the cultural significance of animals and birds in Nepal.

On the day, food is given to crow and worshipped. The crow is considered to bring news to the people. They worship the bird and tell it to bring only the good news.

In addition to the traditional belief, scientifically, crow is helpful to the farmers as it eats damaging bugs and saves the crops. Crow is also an important part of the ecology.

On the second day, dogs are worshiped in Nepal. The dos is considered one of the most faithful domestic animal. Traditionally dogs have been kept at homes to keep the home safe from bad people. Dogs usually scare away thugs and thieves and it is also a good friend of the owner.

The third day is special day in the festival. On the day, the goddess of wealth, Laxmi is worshipped. On the day, homes are cleaned and decorated by flowers and lights. It is believed that Laxmi likes light in homes and she visits the homes that look attractive. The safe and wealth are worshipped, foods are offered to the Goddess and people play cards on the day.

Youngsters, specially girls, go door-to-door to sing Bhaili song and dance. The owner of the home give food and money to the group. The song goes like:

The fourth day is the day of ox. On the day, Newar community people perform a self-worship ceremony called Mha Pooja. On the occasion, people worship oneself and celebrate by eating special cuisine and drinks. The Newar community also celebrate their new on the day.

Like the girls on Gai Tihar, boys go door-to-door on the fourth day of Tihar to sing Deusi. The special singing and dancing program is done by a group of people in which one leads by saying a statement, and others add “Deusi Re”.

These days, in some groups, a full performance of music and dancing are performed by artists. The owner of the house gives money and foods to the performers.

It is believed that sisters love towards their brothers help them in difficult situations. The tika is believed to keep the brothers safe and a long life. 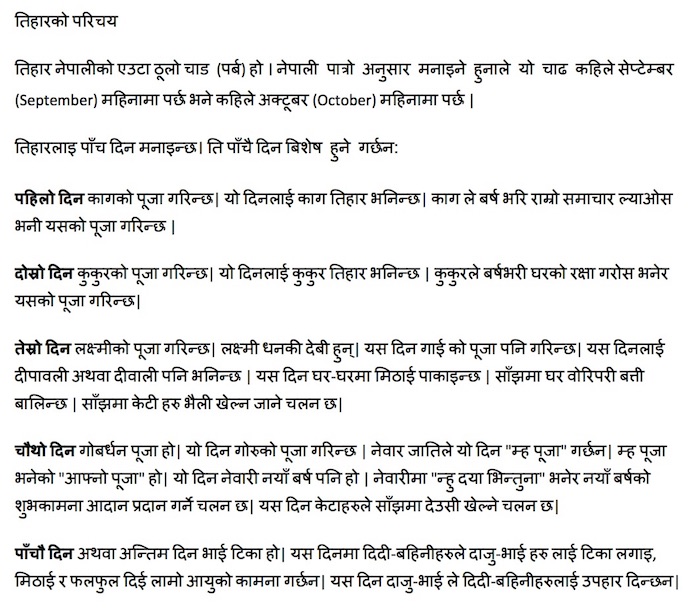