Skip to content
HomeFestivalsWhat is Halloween equivalent in Nepal ?

The people in Western world celebrate 31 October as Halloween. The festival is a Christian harvest festival celebrated by various activities like trick-or-treating and pumpkin carving. People organize Halloween costume parties, play pranks, tell scary stories and watch horror films. Some Christians abstain from meats in Halloween and eat apples, potato pancakes, and soul cakes. I am going to see if there is a Halloween equivalent festival in Nepal or not.

Halloween and the closest Nepali festival

Halloween is about dead people, ghosts and scary things. In Nepal, Newar communities celebrate a similar festival that talk about ghosts and dead people – Gathe Mangal. In the festival people wear iron ring to keep themselves safe from ghosts. In terms of ghosts, Gathe Mangal is the closest festival.

In terms of costume parties and Halloween costumes – Lakhe dances are usually danced by wearing scary costumes and are danced in night. It is more like watching a show of people wear scary costumes. In Gaijatra, people from wear costume and use body art to depict different avatar. So, Gaijatra can also be considered equivalent to Halloween. Another similar festival is Holi. In Holi, people play with colour do face panting and have fun.

In terms of trick-or-treating, Tihar is the most closest festival in Nepal in which people go door to door singing and dancing and ask for money and food. While Halloween is mostly about candies, Deusi Bhailo is about money and other foods. 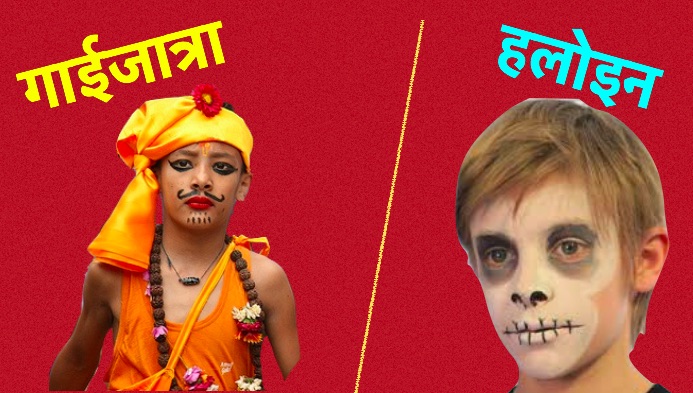