The first vowel in Nepali language Aa is used in conjunction with every 36 consonants letters. For example the first letter in Nepali alphabet – Kaa (क) is made up of half “Kaa” and “Aa”.

Similarly, all other consonants in Nepal have ‘Aa’ attached with them unless it is a half-consonent.

Here is a worksheet for the first vowel in Nepali alphabet. This worksheet is from the Alphabet book we have written. The book is still being written and being improved. Please suggest a better option for the children (and adult) to understand and learn fast. The full book will be available to purchase as soon as possible. Stay tuned for other alphabets and more details. 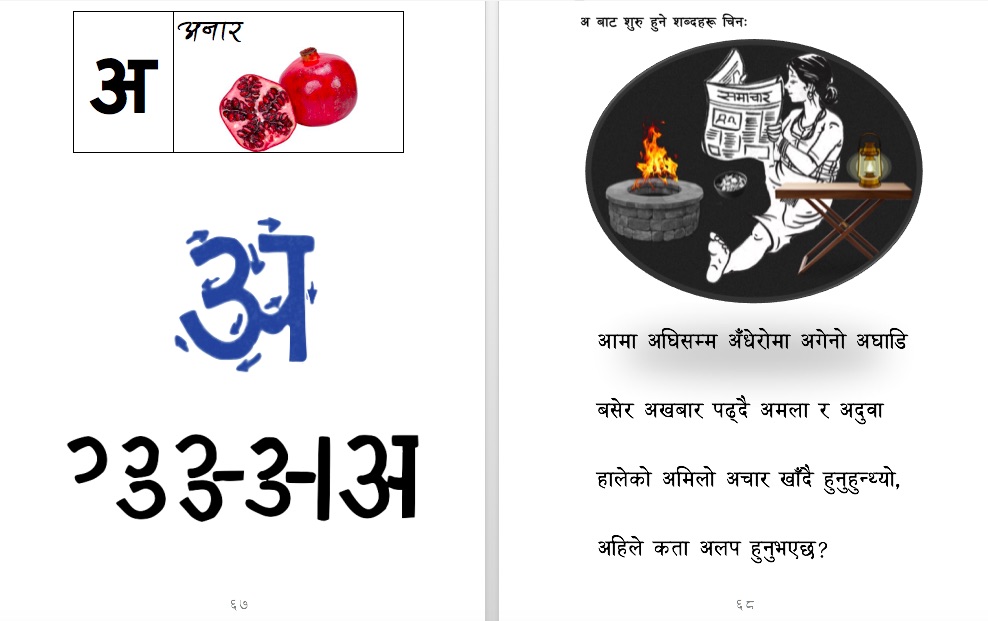 The letter ‘Aa’ is the first alphabet of Devnagari lipi. The lipi is used in Sanskrit, Hindi, Marathi, Nepali etc. The letter is considered the best among the letters according to Upanishad. In Gita, Shri Krishna has told that he is the first letter of the alphabets.

There are five more variations of ‘Aa’ in Nepali alphabet. The variations are simple as they are made by adding lines or dots to the original Aa. A single line beside the letter adds a bit longer sound at the end – ‘Aaa’. A slanted line on top of the combination sounds like “O” and two slanted lines at the top makes it sound like “AU”. A dot on the top sounds like “Am” and two dots on the right side of the letter sounds like “Aah”

An old version of the book is available to purchase here:

Worksheet to learn the five more variations of the first vowel of Nepali language.

More alphabets will be coming soon.